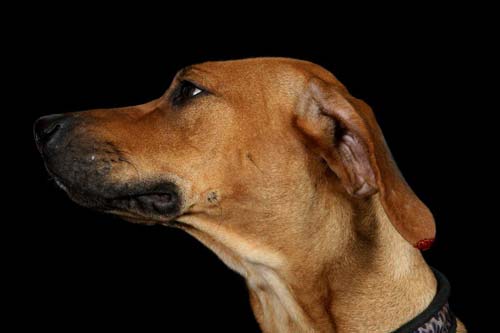 Once in a while I get an SOS call: „ Help! My Rhodesian Ridgeback has bleeding ear tips. What can I do to help him?“  Listening to the whole story, most of it sounds very similar. The ear tips are bleeding and bleeding. Often the bleeding finally stops and then the dog will shake his head and it starts all over again.
If this happens suddenly to the ear of your Ridgeback, the first thing you have to do, is to stop the bleeding. Therefore you must apply pressure on both sides of the ear with a sanitary napkin, clean rags or swabs. When the bleeding has stopped you have to decide whether you need veterinary advice or if you can try to treat it on your own. If you see a deep wound which needs stitches, or if the bleeding reoccurs you have to go to the veterinarian. Otherwise you tape and bandage the ear as first aid and remove the bandage on the following day. If blood trickles through the bandage of your dog or the wound looks infected, it will be necessary to see your vet.

Before you take a look at the multiple possibilities which can be suggested to cure the ears completely after the bleeding, you should try to find out what is the cause of the ear damage.  The cause is important because the treatment might differ accordingly.

Ear tips are often damaged in dogfights or rough plays or they are cut especially on wire fences. In these cases, the cuts are caused through an injury. This can happen to Ridgebacks at any age. Sometimes, it starts with an itching which leads mostly to high-speed head shaking. This head shaking can be very vigorous and combined with the fact that the dogs do not care what their ears hit while they flap their head (door jambs, table edges…). Unfortunately, it is inevitable that Ridgebacks often cut the tips of their ears. But there are many other cases where the beginning is definitely not an injury. This ear problems usually start at the age of seven or eight months. Here, the ear tips start to get dry and afterwards crusty. After a time they start to bleed, crust over; then the crusts falls of and it starts bleeding again. It seems to be a vicious circle. From the vet’s point of view, it is a necrosis in the eartips, which means that some cells have died and others around them react with an inflammation. The capillaries are involved in this process and are highly inflamed as well.

The question is, why this reaction happens at a special age with no obvious reason. The answer is difficult and many-folded. First, the vet has to find out if there are problems with external parasites such as ear mites or hair follicle mites (Demodex) or an ear infection with bacteria, which leads to skin irritation, itching and flapping. A blood test should be taken to do an overall screen, and to see if the Ridgeback is in a healthy condition and does not suffer of another unknown internal disease. This could be an infection like Borreliose, Leishmaniose or an immune deficiency which could lead to Demodex or Lupus erythematodes as well. You should also consider a reduced thyroid function (Hypothyreoidism). In a lot of cases you will not discover the cause of the damage and you can only assume. Mostly the affected dogs have an overall dry skin. The problem occurs much more in extreme temperatures as in cold and dry wintertime or during cold and wet days and less in summer time, indicating that the blood flow in the ear skin plays an important role. If the room climate seems to be very dry it makes sense to use a humidifier. Even the thickness of the ear seems to have an influence because thin ears, which are barely covered with fur, tend a bit more to crusts and bleeding. 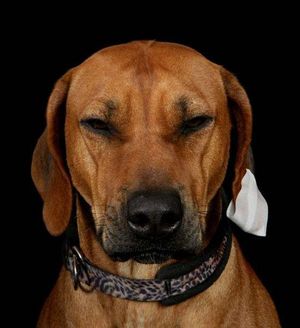 The treatment of the bleeding tips is not easy and it takes a long time to cure them. Usually the wound or cut will not heal on its own. To stop the continuous bleeding and flapping of the ear, it is mostly necessary to tape the ears. There are different techniques to do so. Not all will work with your Ridgeback, so you must adapt any method to make it fit for you own situation. Sometimes, it works if you use a liquid bandage just to cover the wound.

In other cases you have to wrap the head to keep the ear with the bandage in the right place or it is necessary to use an Elizabethan Collar, to prevent the dog from removing the bandage quickly. If possible, leave the bandage in place for several days. It is extremely important to use oil on the bandage, if you want to remove it. After a careful massage with an simple oil (even cooking oil will do) along the edge of the tape, you can carefully lift the bandage. If the wound has not healed yet, clean off the oil and repeat the application process. There are many remedies known to vets which can be put on the wound. Every dog is reacting quite differently. You usually get very good results by using Medihoney or calendula gel. Furthermore there are many ointments your vet will normally have in stock, which are more or less effective. Yet, in Europe for most dog ears a gel made out of hemolysate (a gel made of cattle blood) works very nicely. If none of these methods works sufficiently to cure the ear tips, you can also give oral Pentoxyfyllin (Agapurin®) 400 mg every second day. If no cure is successful, in very rare cases a chirurgical resection of the tip of the ear might be the last solution. 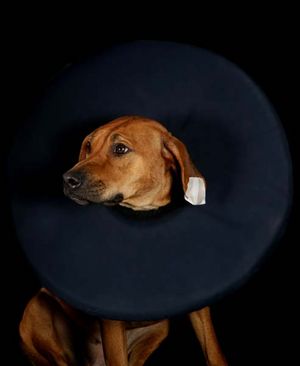 When the ear has finally healed you should always be careful that the skin does not get too dry at the ear tips, using an oily solution like bag balm/Vaseline® to keep it smooth, especially if the weather is cold or wet. The diet should be well-balanced, particularly containing enough fatty acids!

It is not only the Rhodesian Ridgeback which suffers from this special problem.  You will find bleeding ear tips as well in Labs, Dachshounds, Viszlas, Pinschers and other shorthaired breeds. For that reason, it is just a general disposition and not a breed specific disease. Only some Ridgebacks develop this problem. In Europe, certain lines seem to be more affected by it than others. There have been matings where both parents had bleeding ear tips and whole litters of these combinations developed severe ear damages. Hence, the matings of two affected dogs should be avoided in any case. Being a responsible breeder is therefore one of the safest ways to prevent future health problems.

All photos © by Dr. Ruth Marcus

The dog on the photos is only a "photo model", the dog is not affected with bleeding ear tips.

About the Author:
Dr. med. vet. Cornelia Renczes received her medical degree from the University of Gießen. She works in a veterinary practice since 1991 with special interests in dog diseases and animal behaviour. An ELSA/VDH/FCI member since 1993, she has been active in the Ridgeback community as an owner and breeder and is the breeding coordinator of the breed in German club ELSA.