Color Dilutions in Rhodesian Ridgebacks - A Link to our Breeds History

The author is not a native english speaker, so please be gentle with this article. 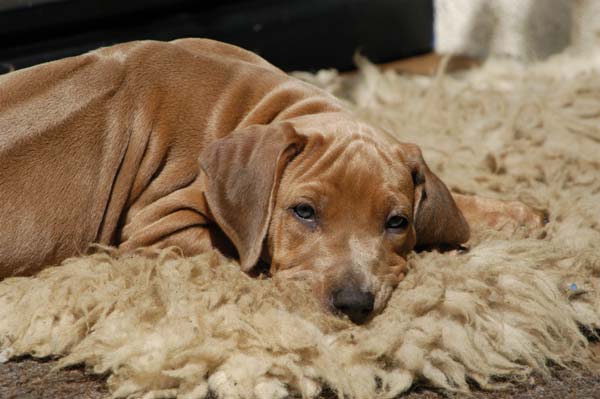 'Grey ghosts', 'blues', 'mouse-colores', 'silver' - or what ever they are called - are mentioned in books and on certain homepages, but information about diluted Ridgebacks was rare and obviously there have been only a few litters.

Of course there's no love affair Ridgeback x Weimaraner (in that case all puppies would be black).
Old time breeders and experienced breeders from around the world recommend not to worry too much: Dilutes were told to be among the foundation dogs of our breed and a normal occurrence during the earlier days. And therefore need to be accepted as part of our breeds history.

Prof. Tosso Leeb (Institute of Genetics in Bern / Switzerland) developed a gene test for 'Color Dilution' in German Pinschers, but this test did not work on Ridgebacks. So he asked for blood samples of affected dogs (both parents, dilute and normal colored puppies). His research led to the discovery of a gene mutation and the development of a new gene test on 'Color Dilution' in Rhodesian Ridgebacks. The test is available at the Institute of Veterinary Medicine in Goettingen / Germany since 2006. Possibly, there is a gene test available in North America, too. 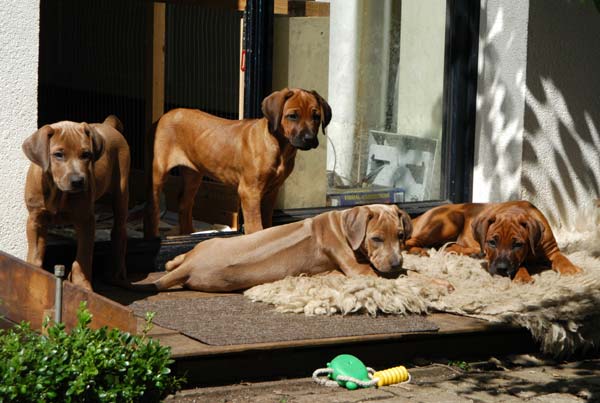 Newborn puppies can easily be recognized because they show a characteristic pigmentation phenotype. The fur colors are a lighter shade: they are born very silver or greyish, but still have some red pigment in their coat, as if they have been sprinkled with red rouge. They have beautiful blue eyes which may stay blue-grey or become amber-grey in color. Their nose leather and nails are grey, not black. As they mature, their body color becomes less grey. Some say, the color looks like a paperbag, but each dog is different as well as normal colored dogs are. There may be a subtle difference wether the dog is a diluted black-nosed dog or a diluted livernosed dog. Actually, they're quite attractive.

What is Color Dilution?

There's a wide variety of genes that influence coat color in dogs. Only some genes are identified using DNA. The dilution series is a relatively simple series.

This locus is classically known as the D locus and contains the melanophilin gene (MLPH). There are two allels at the dilute locus, which are called D (dominant, full pigmentation) and d (recessive, dilute pigment). Coat color dilution is inherited as monogenic recessive trait and is displayed by dogs with the genotype dd, whereas dogs with the genotype DD or Dd show the normal coat color. 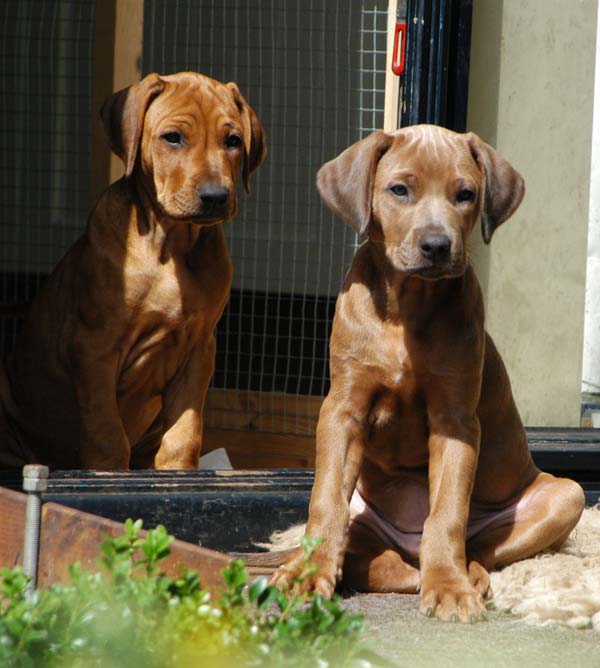 Like most mammals, dogs have two forms of melanin in their coats: eumelanin (which is dark, ranging from black to brown) and phaeomelanin (which are lighter colors of pale cream through shades of yellow, tan and red to mahogany).

It is a color with potential side effects related to health (remember 'blue merle' is another such color for example). The risk for hair loss is increased in dogs with the genotype dd. This hairloss is called color dilution alopecia (CDA) and is known in several dog breeds such as for example the Doberman Pinscher (but alopecia seems to be often among normal colored Doberman Pinschers, too).

The scientists describe a large variation in proneness for CDA. In some breeds (like Large Munsterlander) all dilutes do have CDA (it's called 'Black hair follicular dysplasia' , in short BHFD, which is clinically very similar to CDA and represents the same disease from a genetic point of view). But on the other end of spectrum, relatively few diluted Great Danes or Weimeraners have hair loss. In Beagles, for example, the d allel is also found, but dd Beagles have never been reported to get CDA. 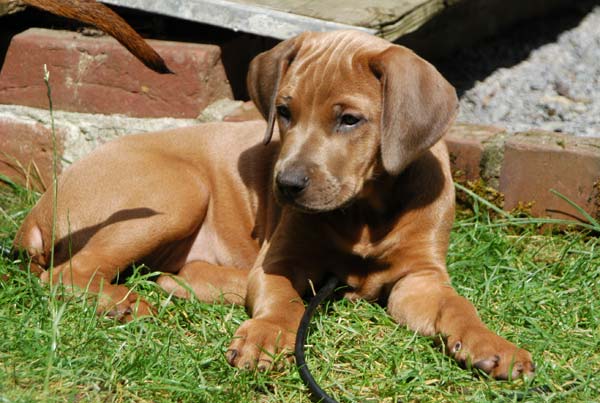 In case of Rhodesian Ridgebacks only anecdotal reports existed, saying that there were no problems with hair loss. Today we know, that dilute Rhodesian Ridgebacks may develop a mild but perhaps progressive hair loss beginning at the back of the ears or in front of the ridge. But apparently, they never develop severe symptoms of CDA such as a chronic inflammation of the skin, which occurs occasionally for example in Doberman Pinschers. Other dilutes are told to have no problems at all. Generally, there may be a slightly higher chance that males may suffer more severe symptoms than females. And that diluted fawn dogs (like ridgebacks) are less likely affected than diluted blue dogs. In some cases hairloss (alopecia) is due to demodicosis or endocrine disorders (particularly hypothyroidism) and should be ruled out.

However, not all dogs that are dd will develop CDA. According to Prof. Leeb, there are probably further genetic factors that determine wether a dog with genotype dd develops CDA, and some of these factors may be breed-specific. To facilitate the genetic research on coat color dilution and hair loss, blood samples of dilutes with hairloss or dilutes without hairloss but older than 5 years, are of interest for the genetic research.

Scientists estimate the age of this gene mutation to be minimum 150 – 200 years (Prof. Leeb) or speak of it as being "quite ancient" (Prof. Sheila Schmutz). The reason for this is that there are so many breeds which carry the dilution effect in their gene pool. Some breeds allow diluted colors to be in standard. 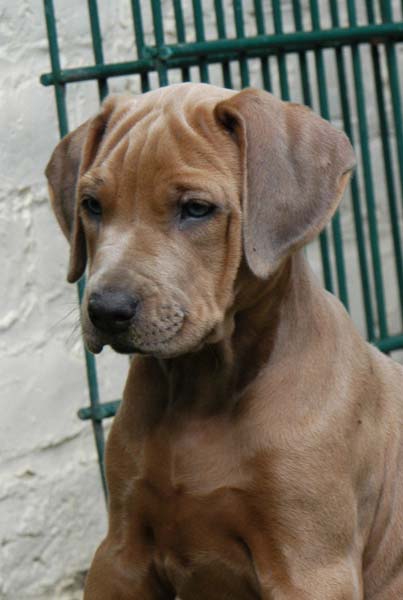 The  theory of crossbreds between Ridgebacks and Weimaraners which may have led to color dilution in Ridgebacks is often heard. But today there's no scientific proof of that. Dilution is a Mendelian autosomal recessive trait and therefore breeders have to select against the dominant normal color to establish a diluted pure-breed like Weimaraners. But where did the Weimeraner get the dilution from?

As some sources point out, diluted Ridgebacks were among the foundation dogs of our breed and a normal occurrence during the earlier days.

Remember the painting of artist Walter W. Weber (in National Geographic, September 1944) showing 3 Ridgebacks attacking a lion. One of the RR's on this picture has too much white and the color of a paperbag – possibly it's a diluted Ridgeback.

In 1957 breed expert Major Tom Hawley wrote in his book "The Rhodesian Ridgeback, The Origin, History, and Standard of the Breed" : "The erstwhile brindles and mousecolours have long since entirely disappeared." On the other hand there are reports saying that they were a normal occurrence in South Africa up until the 1950's, but they were rare. On a Dog Show in Poland a diluted ridgeback was shown and got "excellent".
Meanwhile few litters are reported in Germany, Belgium, Poland, Sweden, Australia, South Africa, America, and Great Britain – for obvious reason: it's not a new thing!

Some breeders use the test, some refuse. So this seems to be a controversial point. Though gene tests can be useful, they may also bring new difficulties regarding a further reduction of genetic diversity or giving a strong emphasis on certain traits.At least one Ridgeback club in Germany requires its members to test for the dilution mutation, and only permits carriers (Dd) to be bred to dogs that are free of the mutation (dd). The test is relatively unknown in the United States.

Genetic research about color dilution is important (and besides quite interesting), but other health issues like cancers, dermoid sinus and other serious health problems seem to be of even more importance.

Dilute Ridgebacks can be controversial, raising various emotions among different breeders. The best place to end is with a quote from Dr. Sheila Schmutz, a collaborator of Dr. Leeb's:

"I do not think that rare colors should raise the price, let alone the "value" of a dog. I would hope that we value every dog we bring into our life, whatever breed or color it might be."