Each pure bred dog has a breed standard. This specifies the attributes of the breed- how it should look, the balance of the dog, size, weight, colouring etc. Like all pure breeds the Ridgeback has a breed standard which should guide the breeder. The Ridge is regarded as the "escutcheon", or "characteristic feature" of the breed. This is also the feature which makes the Ridgeback such a challenge to breed. In many litters a proportion of the litter must be regarded as unsuitable for further breeding due to ridge characteristics.

The breed standard was first formulated in 1925 in Zimbabwe in an effort to standardize the breed. The original standard was based on the Dalmatian standard, and this is still reflected by the FCI classification of the Ridgeback as a "related" breed to scenthounds, under the same heading as Dalmatians. The Australian breed standard is reproduced below. This is the "FCI" (Fédération Cynologique Internationale) standard. The standard was supplied by the Kennel Union of Southern Africa and the Zimbabwe Kennel Club- the latter being the "Parent club". This aligns the description of the Ridgeback as bred in Australia with European and African Ridgebacks

For comparison, this means a dog with a maximum height about that of a Doberman. Also, the Ridgeback is one of the few breeds in the Australian "Hound group" for which a desirable weight is provided. While it may look impressive, don't be tempted by the biggest Ridgeback available, as many are over the desirable height, and many more are over the weight recommended.

Interestingly, not all countries follow the standard set by the parent club. Key differences from other significant standards are

• There are no "utilisation" or "historical overview" sections

• The words "elegance", "no tendancy to massiveness" are not present in the general appearance section

• There is no desirable weight recommended

The US Standard- Standard accepted in 1992:

• There are no "utilisation" or "historical overview" sections

• The words "elegance", "no tendancy to massiveness" are not present in the general appearance section

• The desirable weight of dogs is up to 85 lbs.

• A number of headings are different, but the content is much the same

• No mention of a good average width of ridge being 2", unlike other standards. However, a disqualification is provided for Ridgelessness. One crown, or more

than two crowns is a serious fault

• The section on gait is quite different. The US Standard asks for "At the trot, the back is held level and the stride is efficient, long, free and unrestricted. Reach and

drive expressing a perfect balance between power and elegance. At the chase, the Ridgeback demonstrates great coursing ability and endurance."

• A scale of points is offered to weight the various attributes of the breed- there is considerable weighting given to the ridge.

Interpretations of the Standards

The extended breed standard can be found on the following site:

Interestingly, although the standards all ask for a symmetrical ridge, both the Australian Extended Breed standard, and the US elaboration allow for an asymmetrical box or top to the ridge- which seems inconsistent to the requirement for ridge symmetry.

The elaboration of the standard was revised by the RR Club of the US in 2004. This also adds some of the history of the breed and a useful elaboration on the types of ridges that can be seen (including the statement about the width of the ridge being immaterial that is contrary to the other standards):

These ridges may be commonly seen in the ring and are acceptable: 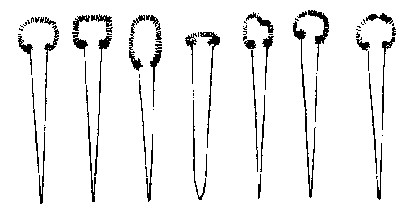 *The width of the ridge is immaterial. 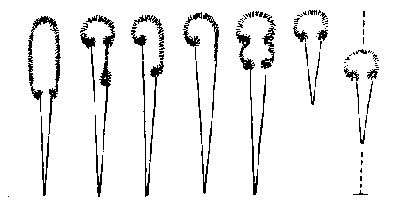 UTILISATION - The Rhodesian Ridgeback is still used to hunt game in many parts of the world, but is especially prized as a watch-dog and a family pet.

BRIEF HISTORICAL OVERVIEW - The Rhodesian Ridgeback is presently the only registered breed indigenous to southern Africa. Its forebears can be traced to the Cape Colony of southern Africa where they crossed with the early pioneers' dogs and the semi-domesticated, ridged Hottentot hunting dogs. Hunting mainly in groups of two or three, the original function of the Rhodesian Ridgeback or Lion dog was to track game, especially lion, and, with great agility, keep it at bay until the arrival of the hunter.
The original standard, which was drafted by F.R. Barnes, in Bulawayo, Rhodesia, in 1922, was based on that of the Dalmatian and was approved by the South African Kennel Union in 1926.

GENERAL APPEARANCE - The Rhodesian Ridgeback should represent a well balanced, strong, muscular, agile and active dog, symmetrical in outline and capable of great endurance with a fair amount of speed. The emphasis is on agility, elegance and soundness with no tendency towards massiveness. The peculiarity of the breed is the ridge on the back, which is formed by the hair growing in the opposite direction to the rest of the coat.

CHARACTERISTICS - The ridge is the escutcheon of the breed. The ridge must be clearly defined, symmetrical and tapering towards the haunch. It must start immediately behind the shoulders and continue to the hip (haunches) bones. The ridge must contain only two crowns, identical and opposite each other. The lower edges of the crowns must not extend further down the ridge than one-third of its length. A good average width of the ridge is 5 cm (2ins).

TEMPERAMENT - Dignified, intelligent, aloof with strangers, but showing no aggression or shyness.

HEAD AND SKULL - Cranial Region: Skull - Should be of a fair length (width of head between ears, distance from occiput to stop, stop to end of nose, should be equal), flat and broad between the ears; the head should be free from wrinkles when in repose.
Stop - Should be reasonably well defined and not in one straight line from the nose to the occipital bone.
Facial Region - Nose - Should be black or brown. A black nose should be accompanied by dark eyes, a brown nose by amber eyes.
Muzzle - Should be long, deep and powerful.
Lips - Should be clean, closely fitting the jaws.
Cheeks - Should be clean.

EYES - Should be moderately well apart, round, bright and sparkling, with intelligent expression, their colour harmonising with the colour of the coat.

EARS - Should be set rather high, of medium size, rather wide at base and gradually tapering to a rounded point. They should be carried close to the head.

MOUTH - Jaws strong with a perfect and complete scissor bite, i.e. the upper teeth closely overlapping the lower teeth and set square to the jaws. The teeth must be well developed, especially the canines or holders.

NECK - Should be fairly long, strong and free from throatiness.

BODY - Back - Powerful.
Loins - Strong, muscular and slightly arched.
Chest - Should not be too wide, but very deep and capacious; the brisket should reach to the elbow.
Forechest - Should be visible when viewed from the side.
Ribs - Moderately well sprung, never rounded like barrel-hoops.

HINDQUARTERS - In the hind legs the muscles should be clean and well defined with good turn of stifle and strong hocks well let down.

FEET - Should be compact and round with well arched toes and tough, elastic pads, protected by hair between the toes and pads.

TAIL - Should be strong at the root and gradually tapering towards the end, free from coarseness. It should be of moderate length. It should not be attached too high nor too low and should be carried with a slight curve upwards, never curled.

COAT - Hair - Should be short and dense, sleek and glossy in appearance but neither woolly nor silky.

COLOUR - Light wheaten to red wheaten. A little white on the chest and toes is permissible, but excessive white hairs here, on belly or above toes is undesirable. A dark muzzle and ears permissible. Excessive black hairs throughout the coat are highly undesirable.

FAULTS - Any departure from the foregoing points should be considered a fault and the seriousness with which the fault should be regarded should be in exact proportions to its degree.